An industrial section of Borough Park, Brooklyn, and a rough-edged corner of Williamsburg may not be the most obvious places to put up luxury housing. But high-end rental buildings are rising in both places, as developers continue to push into untested markets.

The two projects are the 92-unit Hamilton from the Halcyon Management Group, at 968 60th Street in Borough Park, and the 82-unit Williams fromMidwood Investment and Development, at 282 South Fifth Street in Williamsburg, right near the bridge entrance.

“The types of tenants we expect to come, the type we are looking for, are willing to be the first ones to come to this kind of neighborhood,” said Mehul Patel, Midwood’s chief operating officer.

To attract those tenants, developers seem to be going all out with designs, materials and amenities to win them over.

At the five-story, full-block Hamilton, the architect Karl Fischer and the interior designer Hadas Metzler have channeled the spirit of a condominium into a former roller-skating rink. The building’s studios to three-bedrooms will feature bathrooms with Italian porcelain tiles and built-in stereo speakers that can be hooked up to flat-screen televisions or play tunes from an iPod.

The kitchens were designed with entertaining in mind. In most apartments, stoves do not sit against walls, but are tucked into the islands in the kitchens. The idea, Ms. Metzler said, is that during a dinner party, hosts can face their guests and cook at the same time.

Other entertainment options include a first-floor game room, with pool and Ping-Pong tables and a nearby 1,000-square-foot lounge that can serve as a shared home office for self-employed residents, said Yoel Sabel, the senior project manager of Halcyon, which previously developed the 98-unit Plex Brooklyn in Crown Heights. 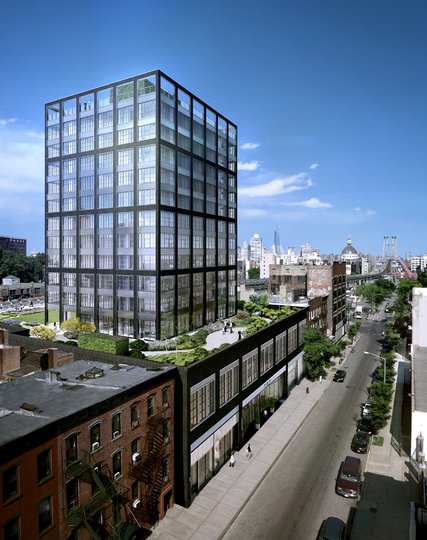 A rendering of the Williams, a new rental in Williamsburg, Brooklyn. CreditMorris Adjmi

Offering in-house attractions may be a smart move. Located near auto-repair shops on a lot that had to be rezoned for residential use before the $25 million project could proceed, the Hamilton might be considered remote for anybody who works in Manhattan. The N train, which has a stop at Fort Hamilton Parkway a block away, normally takes around 40 minutes to get to Midtown. (The commute will be even longer at least until next year: The Fort Hamilton station is being renovated, which requires Manhattan-bound commuters to head deeper into Brooklyn before switching to Manhattan-bound trains.

The building’s rental rates are lower than the borough’s median, which was $2,378 a month for a studio in June, according to Douglas Elliman Real Estate. Monthly rents at the Hamilton, which plans to begin leasing this month and open in September, start at $1,800 for studios and $2,300 for one-bedrooms.

The Williams, too, is a departure for its neighborhood. Its charcoal-colored facade, from the architect Morris Adjmi, soars 13 stories above low-slung red brick apartment buildings near Marcy Avenue on a site that extends to Broadway.

Inside, the studios to two-bedrooms will have glass-paneled oak cabinets, quartz counters and Grohe fixtures. Many of the units will offer views of the Williamsburg Bridge and the Manhattan skyline beyond it. Rows of metal panels in the lobby were salvaged from the canopy of Spilkes Bakery, which formerly stood on the site.

Studios at the Williams will start at $2,660 a month when leasing begins this month, and no concessions will be offered, said Mr. Patel of Midwood. The building is set to open by August.

But renters will get many extras. A landscaped roof features a fire pit, recliners and an outdoor shower. And on the third floor is a 26,000-square-foot wraparound terrace with lawns, a vegetable garden and a dog run, even though some of the grassy areas practically touch the platform at the Marcy Avenue stop of the elevated J, M and Z subway trains.

Broadway, which runs under those tracks, is lined with a hodgepodge of fast-food restaurants, nail salons and discount apparel stores.

For his part, Mr. Patel of Midwood said he hopes to bring in new retail along Broadway with the commercial tenants he will install in the Williams’s six retail berths. One of them has already been leased to Blink Fitness, he added.

The building’s setbacks insulate it from much of the noise from the subway and traffic coming over the bridge, though Mr. Patel said that, in a way, the Williams embraces the din. “There are many New Yorkers,” he said, “who appreciate the hustle and bustle of the city.”